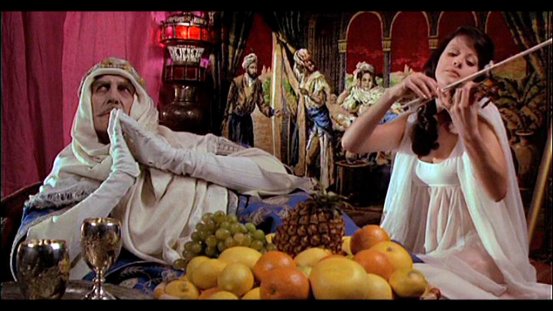 *Here thar be spoilers for The Abominable Dr. Phibes*

Oh dear.  I had such high hopes for this one.  First, if you didn’t already know, I loved the original The Abominable Dr. Phibes.  I love Vincent Price.  I so wanted the sequel to be everything the original was and more.  Now I’m sad.

The plot, such as it is, looks promising.  After Dr. Phibes (Vincent Price ) embalmed himself in the tomb of his beloved wife Virginia, we thought that the good doctor was gone for good and all.  How wrong we were.  He’s back, because apparently you can embalm yourself and then totally put your own blood back into your body three years later.  That definitely works.  Resurrecting his lovely assistant Vulnavia (Valli Kemp)  from her home in a mirrored kaleidoscope, Dr. Phibes sets about the second half of his diabolical plot to reunite with Virginia.  This time he’s off to Egypt to find the River of Life and give himself eternal life … or bring back Virginia … or something.  I wasn’t entirely clear on that.  This naturally involves murdering EVERYONE he comes in contact with.  All righty.

As with the original, the murders are pretty unique.  Hawks go after an under-used John Thaw (TVs Inspector Morse), scorpions get some poor young archeologist, and an elaborate mechanical clamp crushes another fellow to death.  But that’s really the most that can be said about this one.  The plot is all right, with Robert Quarry eating the scenery as Phibes nemesis Darrus Biederbeck, a man who wants to find the River of Life for his own purposes.  Inspector Trout and Superintendent Waverley (Peter Jeffrey and John Cater)  are back too; their scenes are among the best and I found myself wishing that they had appeared in their own series.  Peter Cushing appears all too briefly as a ship’s Captain, as does Terry-Thomas in a scene with Trout and Waverley.  The art-deco style of Phibes’s Egyptian tomb – yes, he does have one – and brief scenes of Phibes and Vulnavia experimenting with interior design are fabulous.  Unfortunately these are only bright lights in an otherwise murky film.

Price bears the brunt of the badness, I’m afraid.  His dialogue was purple in the original; here it’s incandescent violet.  He addresses his dead wife far too much, and there are extensive scenes of him recapping for her corpse what’s happened thus far.  So while he’s still Vincent Price, he’s Vincent Price saddled with an unmanageable script.  What’s more, all the sympathy we felt for Phibes in the original rapidly dissipates as he murders one innocent after another.  His revenge seems natural, if extreme, in the first film; in this one it’s basically tangential.

I’m sorry to say not to bother with this one.  Despite some good points, the film as a whole is by turns boring and confusing and underuses the talents of the very talented people involved.  I was hoping that Phibes would try resurrecting Virginia, perhaps harvesting the organs of his victims to rebuild her a la Frankenstein? That would have been interesting.  In this case, I wish that Dr. Phibes had stayed embalmed.