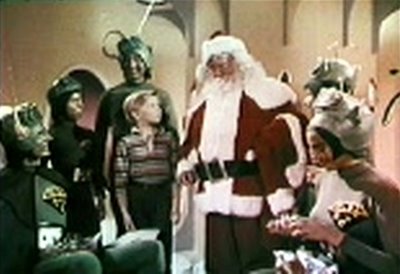 I have sat through Death Bed: The Bed That Eats, Hell Comes To Frogtown, Space is the Place, Plan 9 From Outer Space and countless lesser Ed Wood films.  I have watched The Room.  I thought I was proof against the truly dreadful.  I was wrong.

Santa Claus Conquers The Martians is probably the worst “Santa Claus gets kidnapped by Martians” movie ever made … and as far as I know, it’s the only one.  Basically, the Martians – who are dudes in green underwear and flight helmets – are all upset because their kids keep watching Earth’s TV programmes and have become despondent.  Why? Well, they don’t have Santa Claus.  And they eat pills instead of food.  And their parents speak in stilted sentences.  And their planet is made of cardboard.  Right.  So, naturally, being concerned parents, the leader of the Martians Kimar (Leonard Hicks) and his rag-tag team of fellow Martians, Voldar, Dropo, Gomar and … someone else, head to Earth to kidnap Santa Claus (John Call) and bring him back to Mars to make the Martian children happy again.  On the way, they pick up Billy and Betty, earth children in the wrong place at the wrong time.  There’s also a robot made of cardboard.  And elves.  And guns that are definitely hair-dryers.

The production values of this film are worse than a high school stage musical.  In fact, I’m pretty positive that the films my friends and I made when we were 15 had better sets and more realistic performances.  But let me give you a run down of some of what is awesomely awful in this movie:

And so forth.  Honestly, I didn’t watch the MST3K version of this because I wanted to experience it in all its unadulterated glory.  This movie is so bad that I laughed all the way through it.