There are a number of pre-requisites to the enjoyment of the bizarre Ken Russell/The Who film Tommy.  One is to actually like The Who’s music, because you’re going to be hearing it for nearly two hours.  The other is to be able to handle Ken Russell’s style, which is something like Luis Bunuel on acid.

There is no doubt that the original album Tommy is a thousand times better than the (mostly) covers of the songs that appear in the film.  Oliver Reed, although he’s a great actor (one of my favorites, and a sexy beast at that) cannot sing to save himself.  Ann-Margret, playing Tommy’s mother, can.  As can Tina Turner, Elton John, and Eric Clapton, all of whom contribute their vocals and prodigious musical gifts to the production.  Roger Daltrey is not really an actor, but then again he doesn’t need to be for most the film.  Keith Moon is Keith Moon, which means that you just have to enjoy every second he’s leering and laughing on the screen.

The plot of Tommy, such as it is, is more highly and narratively developed than the free-form of the original album.  Russell overlays a Jesus myth on what is basically a story about the rise and fall of a celebrity.  Tommy (Roger Daltrey), due to childhood trauma (he sees his mother and her new husband accidentally murder his father), loses his sight, his hearing and his speech.  The first half of the film encompasses the family attempting to find a way to give Tommy a normal life, to cope with his disabilities, and includes all kinds of fun stuff, like abuse and prostitution.  Luckily, these are all in the shapes of songs: Eric Clapton performing ‘Eyesight to the Blind’, Keith Moon as Uncle Ernie, Tina Turner singing ‘Acid Queen’.

Then Tommy discovers that, although he can’t see or speak or hear, he can play pinball.  He becomes, if you will, a Pinball Wizard

and Elton John sings a song about him.  It’s one of the most famous songs in the film, featuring John on ginormous platform shoes with The Who backing him — it’s also the one most taken out of context.  Tommy is now a celebrity.  But he’s still blind and deaf and silent.  After Tommy’s mother writhes on the floor covered in pudding and baked beans (it all makes perfect sense, trust me), the parents decide to take Tommy to a Doctor (Jack Nicolson?!) who reveals that there’s nothing physically wrong with him.  So he gets shoved through a mirror and regains his sight, his hearing and his voice.  And that voice, ladies and gentlemen, sounds like Roger Daltrey’s, so we’re all very happy that he can now sing.

If all of this sounds odd, that’s because it is.  But amazingly enough, it works.  Russell’s surrealistic style is perfect for The Who’s music.  Although the narrative is fairly straightforward, the images are wild, from John’s massive shoes, to Tina Turner’s trippy prostitute to the almost inexplicable scene with Ann-Margret writhing on the floor covered in baked beans (the reason behind that one is first that it’s a reference to The Who Sell Out, an album that included fake ads for real products, and a definite finger to the commercialization of rock music and celebrity, which The Who themselves engaged in).  Brief appearances by the band members — Entwhistle and Townshend in ‘Eyesight to the Blind’ and ‘Pinball Wizard’, Keith’s more extended performance in ‘Fiddle About’ and later in ‘Tommy’s Holiday Camp’ — remind us of the geniuses behind the rock.  The singing and music are all top-notch.  What’s more, although Townshend may have been perturbed at Russell turning Tommy’s story into a Christ story, it does work on a narrative level.

Where Tommy fails, unfortunately, is where it should succeed the most.  Once the title character gets his voice back, the film falls apart.  The weirdness that has permeated the scenes, the sinister nature of the characters and Tommy’s escape into his own mind, becomes externalized.  It’s a crying shame, because Daltrey has been silent for so long that it really is a thrill to hear him sing again.  Tommy’s downfall is precipitous and, one feels, unnecessary.  While ‘We’re Not Gonna Take It’ on the album feels like a declaration of independence from Tommy’s followers, a sense of liberation from having to ‘follow’ anyone or anything, in the film it becomes needlessly sinister as they murder Tommy’s parents and family, and drive Tommy away. 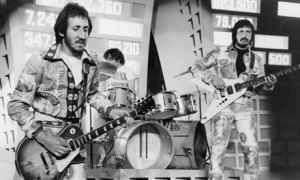 Finally, in a film of the FIRST rock opera, The Who barely get to perform together.  In fact, the only song that includes all four members of the most energetic rock band in history is ‘Sally Simpson’, but even then you barely get to watch Moon’s brilliant histrionics, or Townshend’s windmill guitar.  I think it would have been far better to allow The Who to be a sort of Greek chorus to the story.  At least one extended performance seems to be in order, for the viewer to be truly satisfied.  Daltrey is the most featured performer, but the dictates of the story force him to be silent for much of the running time.  And unfortunately, Daltrey finally gets to sing just as the film starts falling apart.

Taken in sections, Tommy is excellent.  Taken as a whole, it is at best problematic, at worst an incoherent text.  Russell doesn’t even seem certain what he’s trying to do with the film, whether it’s a showcase of the music or a Christ story or a tale of the rise and fall of a celebrity.  The film literalizes the lyrics: the smashing of the mirror is somehow a less powerful emblem when you actually see it done.  And the introduction of various symbols — the cross combined with wartime poppies, the cross with pinballs, the vaguely fascist outfits Tommy’s disciples wear, etc, etc, — don’t seem to have much purpose in the film as a whole.  Their significance is lost in a myriad of contradicting symbols.

Russell made better films than Tommy, no doubt.  Women in Love  and The Devils spring to mind.  But then again, he never made another movie with The Who and a whole bevy of 70s rockers.  There’s so much good stuff here.  I have a deep affection for the film because it introduced me to The Who and still energizes me when I’m feeling low.  It’s one of those films that can be watched in pieces, picking and choosing on the DVD, and actually comes out better than if watched from beginning to end.  It isn’t essential, but it is a lot of fun.  And Jack Nicholson sings!